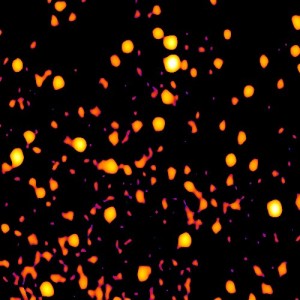 SkyView V3.3.4 has just been released. The new version includes a set of maps from the GaLactic and Extragalactic All-sky MWA Survey (GLEAM). The GLEAM survey was taken at the Murchison Widefield Array (MWA) and covers most of the sky south of 25 degrees north, about 25,000 square degrees.

There are a few new capabilities in SkyView as well. A new setting, TrackedInputs, can be used to transfer values from the input FITS files to the outputs. The value should be one or more comma-separated FITS keywords which are assumed to be real-valued. The pixel-weighted averages of these keywords are computed as the input files are read, and the averages are written out to the output file. The new keyword is used in the GLEAM survey to average the beam characteristics.

A new survey name, Average, may be used when generating RGB images. Previously, when one wished to create an RGB image from only two surveys, one could pick only two colors, or one could use one of the surveys in two of the RGB colors. Users now have a third choice, to use the average image of the two inputs as the third color. This can give a pleasing image while still evenly weighting the two input surveys. Only one Average survey can be specified and there should be two other surveys specified. The position of the Average survey indicates which color is to be averaged. E.g.,

A new smoother is also available in skyview.data.ThresholdMedianSmoother. This smoother (which can be used as a postprocessor when using SkyView-in-a-Jar), does a median filtering of the image using some specified box size. However the median filtering is thresholded, so that a pixel is replaced with the median value only if it deviates from the median by more than some specified offset or ratio. This filter is essentially what is used in the popular Dust And Scratches filter in PhotoShop. One could, e.g., use this filter to get rid of point sources in an image while keeping a diffuse background. There are lots of options in this filter. E.g.,
one can set the threshold to 0 to do median filtering, request thresholding by offset or ratio, and threshold in only one direction,
i.e., for high values but not low as well as setting the box size for the median calculation.