Can you help me find a star?

We often receive email messages asking for help finding a star. In this post we will give instructions for displaying an image of a star in SkyView, as well as provide further tips for finding the star on a star chart and determining the star’s constellation and one final note about purchasing a star.

Instructions for generating an image of a star:

1. To generate an image in SkyView you’ll need a set of coordinates – the star’s right ascension and  declination.  These are the stellar equivalent of the latitude and longitude on the Earth. These may be in various formats but the RA usually is given as three numbers – hours, minutes and seconds.  The first is between 0 and 23, the second between 0 and 59 and the third between 0 and 60.  The third number, the seconds, may  contain a fractional part.  The Declination is similar, but the the first number can range between -90 and 90 and is called degrees not hours.

For SkyView these coordinates may need to be converted to a format containing just hours, minutes, seconds or decimal numbers.  They can be separated by a comma or the sign for the declination (more information)

The SkyView format of this set of coordinates would be:

Coordinates in this format can be used in the SkyView Query form.

Enter the coordinates in the Coordinates or Source input box.

2. Next a SkyView Survey needs to be selected.  The SkyView Query form provides many surveys in many wavelengths.  Typically someone trying to find a star will want to see how it appears in the night sky so an optical survey is best.  The best survey to start with is the Digital Sky Survey (DSS) which is at the top of our DSS survey category.

3. Once at least one  survey is selected and coordinates are entered the user can click the Submit button and an image of the sky centered on the coordinates will be displayed. 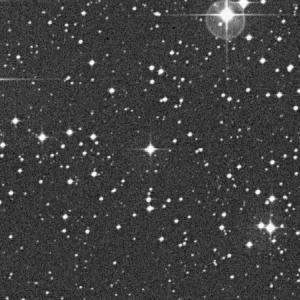 The SkyView Query Form has many other options for manipulating the SkyView image to change image size, image colors, resampling, projections, coordinate systems or to add contours and other overlays.  These are just a few of SkyView‘s features. An example would be the option to mark the center of an image with a circle. Apply this feature in the Overlays section of the Query Form (see below). Check the Image Center Reticule option before submitting the query. 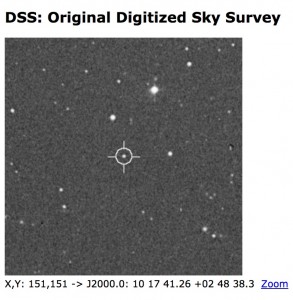 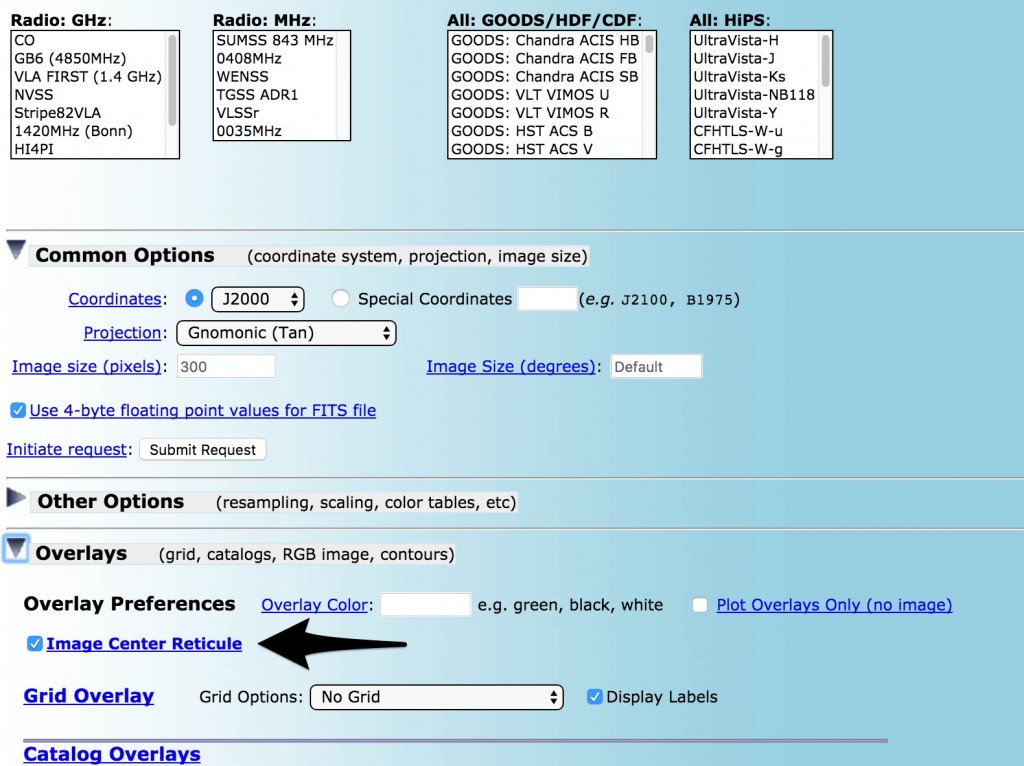 There are many websites that provide sky charts for a particular location and information about constellations.  Here are two of these sites  we have found useful:

http://djm.cc/constellation.html: A simple form that displays the name of the constellation for specified coordinates

http://www.fourmilab.ch/yoursky: Get images of entire sky as viewed from a given location at a specified time and date.  Their Virtual Telescope shows constellations and other objects at specified coordinates.

https://simbad.u-strasbg.fr: If you want to find more information about a star, Simbad is often a good place to start.  If you enter the position in the position search  you’ll find a list of nearby objects.  If there’s more than one, click on the nearest to your position and you’ll get information on measurements of the star: brightness, parallax (3261/parallax in mas is the distance in lightyears), and spectral type.  With the help of astronomical text books, you can use the last to get an estimate the diameter and mass of the star.  Occasionally those are directly measured too.

Many of these requests for help finding a star come from people who have purchased or received a gift of a star from a registry service. No star registry services are recognized by any political or  scientific authorities.  More information can be found at http://www.iau.org/public/buying_star_names/

This entry was posted in Discussion. Bookmark the permalink.

142 Responses to Can you help me find a star?